Today’s show will feature all three new love guests (Chris Ville, Chiddy Bankz and Meriton). The new love guest will who they are willing to be paired with to form Ultimate Love couples.

So far, we have seen some connection between Chris Ville and Chris, Chiddy Banks and Sylvia. Meriton is still undecided as she is drawing attention from Jerry and Louis.

The show will also feature couples that will be nominated for possible eviction. Each couple will be given the opportunity to nominate a couple that should be evicted. Couples with the highest nominations will be place on eviction where viewers will be allowed to vote their favourite couples nominated for eviction to avoid eviction from the show. Couples with the least number of votes will be eliminate from the show come on Sunday.

During today’s Ultimate Love live check out show, each couple was required to nominate two couples for possible eviction. The nominated couples with the highest nominations will be place on eviction.

Aunty issued a blank card where each couples will write its name and the names of two couples they are nominating for eviction. After nomination, the couples will place the card in the nomination box where the presenter will take the card and read it out for confirmation by the couples.

The 3 new guest/contestants added to the show on Friday 21st February, 2020 will now reveal which of the love guest they are connected with and willing to pair with to form an Ultimate Love couple. The names of the 3 new ultimate love guest are:

*Chris Ville has revealed that he will pair with Chris

*Chiddy Bankz Ville has revealed that he will pair with Sylvia

*Meriton has revealed that he will pair with Jerry.

The couples were given the opportunity to swap partners but instead the following couples chose to stay together. The couples were then asked to nominate two couples for eviction. The nominations was read out by the presenter Dakore. Here are the couples’ nominations. 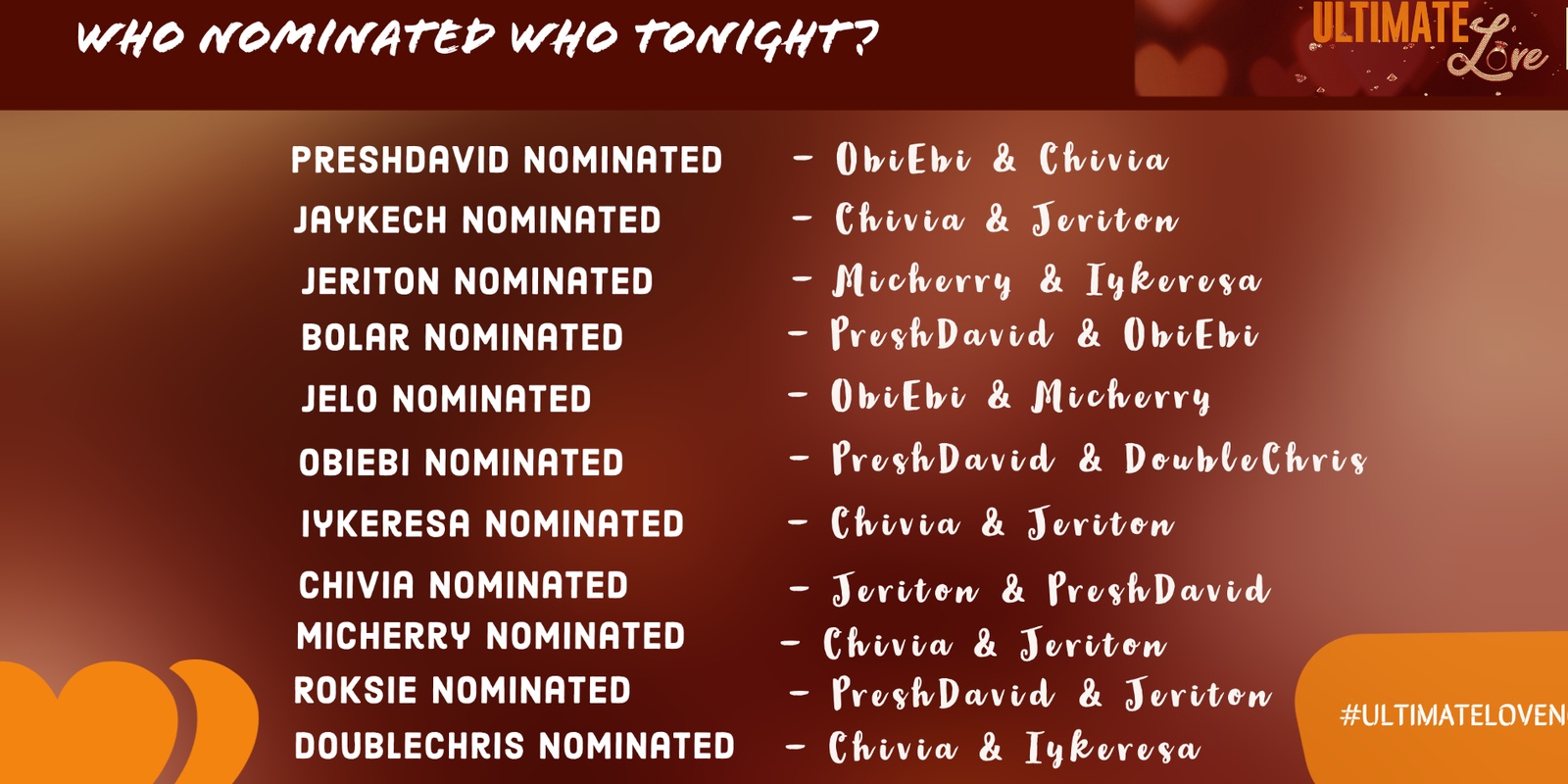 The following couples got the highest number of nominations from the nomination show. This couples will now go into the ultimate love voting phase were viewers will vote their favourite couples to remain in the show.

You can vote using each housemate name in an SMS. For example, to vote Me in the Ultimate Love Nigeria season 1 (2020) show, simply type VOTE Me in a SMS and send to 32052

Voting through SMS is limited to 100 votes per person.

Vote your favourite housemate for week one Ultimate Love reality show below.